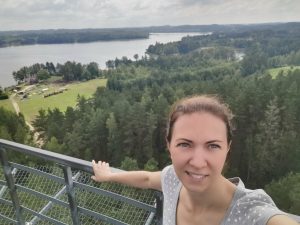 Šiliniškės / Ginučių (Bitės) Observation Tower
This is the first observation deck built on a mobile telecommunications antenna tower. The playground was built in 2004 following a joint agreement with Aukštaitija National Park. installed by one of the country’s telecoms companies. This is probably why locals sometimes refer to the tower simply as the Bite Lookout Tower. Don’t be surprised if someone calls the tower the Ginučiai Lookout Tower – it is the name of the nearby village of Ginučiai, so the tower is often referred to by that name. The 30-metre-high view is magnificent and can be enjoyed in all seasons. The tower is located in Ignalina district, next to the road Ginučiai – Kirdeikiai (about 2 km from Ginučiai), close to Ūkojo and Pakasas lakes.
Coordinates – 55.381175, 25.974417. 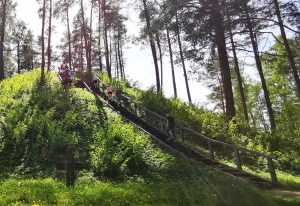 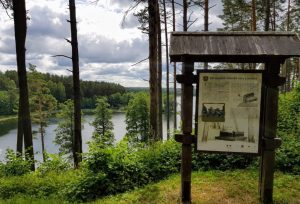 Ginučiai and Papiliakalne hillfort
The hillfort, located among forests and lakes, dates back as far as the 13th century. You will have to climb more than one or two steps to reach the top, but the view from the mound will be worth it.
The Ginučiai hillfort with its settlement is a state-protected historical monument. It is located in Linkmenų municipality, 1.3 km south of Ginučiai, between Linkmens and Ūkojo lakes. It is set on a large, steep, tree-covered hill. The eastern and western slopes are 16-20 m high, the others are lower and more gentle. There are remnants of terraces on the slopes. The apex site is oval, 45 m long in a north-south direction; 30 m wide. On its northern and southern edges there are the remains of collapsed embankments and silted-up ditches. At the western foot of the mound are the remains of an old settlement. The cultural layer was preserved: moulded striped and rough and green pottery (the latter decorated with parallel lines) was found. Ginučiai and the adjacent Papiliakalnė hillfort are identified with the 13th-15th centuries. Linkmenų Castle, which was part of the central Lithuanian defence system. Important in the 14th and 15th centuries. a point of defence against the Livonian Order. Protected the old trade route to the Daugava.
Coordinates: 55.373861, 25.98497. 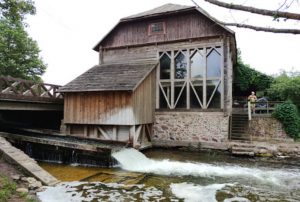 Ginučiai Water Mill
GinučiaiWater Mill in the 19th century. in the second half of the century was built by the landlord Gimžauskas from Linkmeni, who invited several farmers to help him. However, not everyone was happy with this mill, as it flooded the peasants’ fields, leading to local lawsuits between the peasants and Gimžauskas. After Gimžiauskas’s death, the entire mill was given to the village. During the war, many of the surrounding mills were burnt or demolished, so people came from farther afield to mill their grain. Paintings by folk artist Petras Gaižutis hang on the walls of the mill’s premises, telling all kinds of stories and legends about the mill. Around 1968. the mill stopped working after the mill equipment broke down, and in 1978. The mill was bought by the Ignalina Tourist Base and repaired. The mill is currently under state protection and belongs to the Aukštaitija National Park Authority, and there is an equipment museum here.

At the foot of the lake is a great place to swim and enjoy the water cascade. 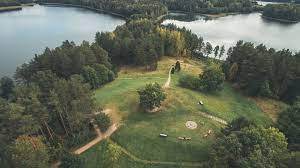 Ladakalnis
The most famous viewpoint in Aukštaitija National Park. Ladakalnis is a 176 m high mountain in the Šiliniškės ridge, a chain of hills that, like a dragon’s crest, stretches in both directions as far as the eye can see. It is believed that sacrifices were made on this hill to the Baltic goddess of life, Lada, the Great Mother, the birth mother of the world. The panoramic view from the top of the hill is magnificent, with 6 lakes visible. Ladakh Hill has been declared a geomorphological natural monument.

The only Beekeeping Museum in Lithuania, with its sculptures of pagan gods, invites you to get to know the secrets of beekeeping. The museum grounds are fun to walk around, taste honey or relax in hammocks. Indoor interactive exhibitions invite you to visit the beekeeper’s cottage, the workshop and even the hive itself.

Bird Village
Enteringthe gates of the Bird Village can make you feel like you’re in a Disney cartoon: geese honking towards you, chickens in their pants running up and down, a brave little lamb wriggling around, a donkey showing its voice out of the corner of your eye. A fairy-tale village in the Ignalina district, set up by a family, is a place where you can pet “the best animals in the world”.
“Notonly groups are welcome at Paukščių Village, where educational programmes are offered, but also individual visitors can get to know the farm and its inhabitants…
If you want happiness, the Bird of Happiness lives in Cioni. Come and find her.
It is a place in the picturesque Aukštaitija National Park, where you can see more birds than you have ever seen and hear more bird calls than you have ever heard.

Palūšė and its church;

Ignalina town, sculpture for the legend of the origin of the name. Šakoti bakery – restaurant ROMNESA;